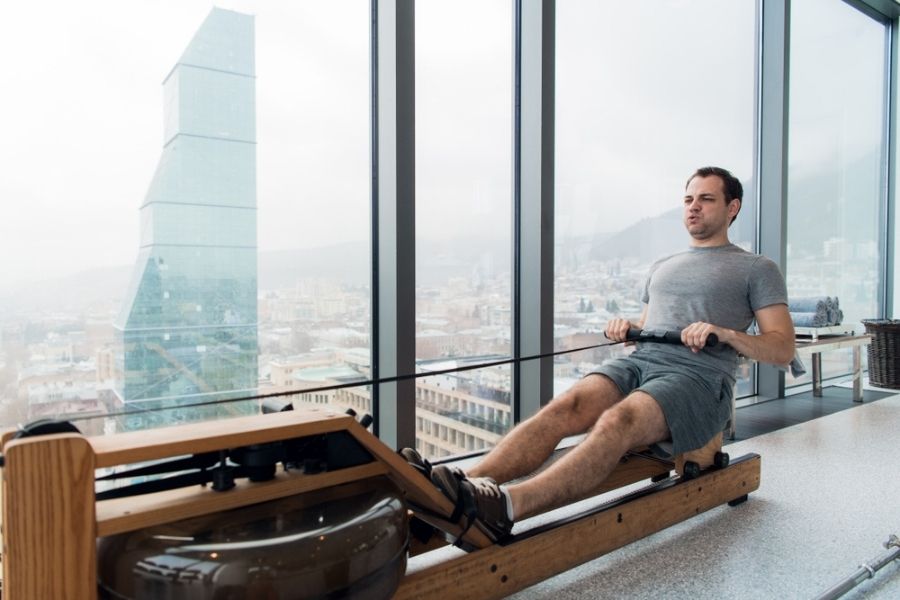 WaterRower Review: Everything You Need To Know (2023 Review)

The WaterRower is perhaps the most popular water resistance rowing machine and for good reason. For starters, the design and craftsmanship are impeccable. It looks like a high-end piece of furniture you would pick up at West Elm – except that it’s for exercise.

Secondly, it’s very easy to jump on it and bang out a 500-meter row without fidgeting with digital settings.

And finally, it isn’t noisy.

You get the gentle sound of whooshing water that won’t irritate your neighbors. However, there are some factors that come down to personal preference and a few things I don’t love which is why I’m writing this WaterRower review.

But in short, if you know you want a high-quality water resistance rower, the WaterRower is the top of the line choice. In fact, its our number one pick for the best rowing machines in the water rower category.

That being said, if you’re still undecided then keep reading…

There are multiple WaterRower models to choose from. Here’s a quick breakdown of each one and what they’re all about:

There are three monitors available, the S4, A1, and A1 PRO.

Designed for use in the classroom environment, it displays time, distance, calories, stroke rate, speed, and has a race/pace coach option.

While they track all of the key metrics, the monitors are a little old school.

They don’t show you things like your force curve which shows you changes in the force of your rowing, you can’t program in workouts, and it doesn’t provide you with instant feedback on your intensity.

There are ten rower models that differ by the material they’re made from, the monitor on the rower, and whether or not its single or dual rail.

The differences between them are relatively small so you can choose the cheapest one or pick a more expensive one if you prefer the specific look but the price is significantly higher for some of the models and the features don’t justify the increase in my opinion.

The WaterRower comes in different woods (solid ash wood, black walnut, cherry wood), aluminum, stainless steel, or a wood and aluminum combo. In my opinion, the wood looks the best.

It almost looks like a nice piece of furniture rather than a rowing machine.

As far as the weight of the units goes, when filled with water they all weigh somewhere between 100 and 116 lbs. and have wheels in the front so they’re not hard to move around.

Most of the WaterRowers are dual rail design. This simply means they have two parallel rails for your seat to move on.

The only models that have the single rail are the A1 Studio and the A1 Home which are a combination of wood and aluminum and tend to be more pricey.

Needless to say, you’ll be fine on the weight limits and don’t have to worry about breaking the unit.

Things To Consider Before Buying

The WaterRower is a mid-range rower in price. It’s not cheap but you probably knew that already just by looking at the pictures.

It’s made from high-quality wood and/or metal, has a decent monitor and you can tell it’s built to last. It’s a quality piece of equipment that’s designed for daily use and built to last so expect to pay more than you would from your average budget rowing machine.

According to the WaterRower website, the warranty is 1 year on repair or replacement of defective equipment and is upgradeable to 3 years excluding the electronics, and the frame has a 5-year warranty. You can read the full warranty on their website here.

The WaterRower company offers great phone support so if you do have any issues or need help with something, it’s easy to call and speak with someone.

There’s no arguing that the WaterRower is a premium rower. But there are some things that come down to personal preference.

For example, do you prefer a rower that is very close to the feeling of actually rowing a boat? If so, the water resistance can’t be beaten.

It also makes a relaxing “whooshing” sound rather than the sound of a far/air rower which tends to be a little noisier.

The look of the rower and where you’re using it is also a consideration. Do you care how it looks and do you want a nice piece of furniture to put in your living room?

If so, the WaterRower is by far the best-looking rower. When compared to something like the Concept2 Model D which still looks great but it’s clearly a piece of workout equipment.

As mentioned before, there are no resistance levels per se. Instead, the water provides your resistance so the harder you row, the harder it becomes to row. You’ll be forever challenged with this one.

In many ways, I like that you can jump on and start rowing without first needing to program something in or adjust the resistance.

On the other hand, I do like adjusting resistance from time to time because it helps me to mentally monitor progress and at least feel like I’m working harder because I have this tangible thing to adjust.

It comes down to your preference though and honestly, I can’t say one is better than the other because they’re apples and oranges.

The Concept2 is the gold standard in rowing machines. It’s an air style rower and so we’re using that as the baseline for noise.

With the WaterRower, it’s a nice whooshing sound whereas the Concept2 is a loud fan sound. There’s not a word I can type to describe the sound but if you’ve ever heard a rower that uses a fan, this is how it sounds.

Needless to say, if you live in an apartment, the one that won’t upset your neighbors is the WaterRower.

The smoothness of the ride

The ride is very smooth. When you pull the handles back, it closely resembles rowing an actual boat so you’re not getting that jerky feeling that you sometimes get with magnetic and fan rowers.

With fan rowers, you can sometimes run into a situation where you’re waiting for it to catch up and you have a dead spot of no resistance at the base of the motion for just a second. With the WaterRower, you never run into that issue.

As far as the seat and rail go, the seat is cushioned and very comfortable even with extended rowing sessions. The action of the seat on the track is also super smooth so no issues there.

Small and easy to store

It has a large water-filled tank at the front of the machine and it’s made from wood so it’s heavier than an aluminum fan or hydraulic rower.

That being said, with the tank full it weighs about 100-ish lbs. with the majority of the weight concentrated at the front which is also where the wheels are. So while it is heavier, it’s not hard to move it around.

Additionally, it can be stored fully upright. So when you’re done, you can just lift it up and push it against the wall.

When it’s in the upright position, it’s very stable so you don’t have to worry about it randomly falling over. It also takes up a minimal amount of space so you can put it in a corner or somewhere out of the way.

All models come with a 5-year warranty on the frame and they have high weight limits so it’s pretty solid.

The one area that people have reported problems is with the water tank.

If you put it in an active gym or in a spot where it can be banged into, the tank can spring a leak and if that happens, you have to buy a new tank that is moderately pricey.

That being said, if you’re using it in your house, it’s highly unlikely that you’ll have this issue.

The water rowing machines require a unique type of maintenance. The tank that holds the water can get algae and therefore requires water purification tablets.

WaterRower will provide you with the tablets and you only have to drop one in every 2-3 months so it’s very minimal maintenance, to say the least. That being said, if you forget and do get an algae problem, it’s a bit of a pain to drain the water and refill it.

The Concept2 Model D is the top rowing machine and widely considered to be the gold standard.

It’s a different experience altogether because it’s an air rower and not a water rower but it’s extremely reliable, has an excellent monitor with programmable workouts, and it breaks down into two pieces for easy transport or to move it out of the way.

Which do I prefer? I like the Concept2 better than the WaterRower but it’s really a personal preference.

The Concept2 doesn’t look as nice as the WaterRower, it doesn’t match the feeling of rowing on water as closely, and it’s noisier. But I like that durability, the foot positioning, and the overall experience of using it. I feel like it’s a better machine for pure fitness.

I have not personally used the Mr. Captain rowing machine so I can’t say directly what the experience is like.

However, from a style and functionality perspective, it is very close to the WaterRower and at the time of this writing, it’s a little more affordable. It has a very cool vintage look, a similar monitor, and a dual-rail design.

The WaterRower solves the problem of getting a good workout in the comfort of your home and it looks fantastic. You can simply jump on it, start rowing and increase the resistance by rowing harder. It’s a no B.S. rower that’s great for both beginners and athletes.

So would I recommend you buy it? Yes and no.

Get the WaterRower here

However, if you know you want a high-end rower that’s versatile and you don’t care what type of resistance it uses, then the Concept2 is my favorite. It’s lightweight, still looks great, and it has a more advanced monitor with programmable workouts, real-time feedback, and some cool bells and whistles. It’s widely considered to be the “gold standard” in rowing machines.

I hope this WaterRower review has been helpful to you and that you either get started in rowing or upgrade your current setup to one of those two machines today. Because, ultimately, you can’t go wrong with either one of these tops of the line rowers.